Each year, I am fortunate enough to get to do a little Christmas service at two of our local assisted living facilities.  These folks are wonderful, wise adults who bring their entire lives of faith to Bible study each month, but my favorite is when we gather at Christmas time.  This year, I developed a resource to use with them, and it occurred to me that it might also be a great devotion for families who are gathering for Christmas.  It combines the old tradition of my family of singing Christmas songs together around the tree (you get to pick the songs you want to sing) with readings from Bible about the Christmas story and questions that any member of the family is more than qualified to answer, no matter their age or stage.  I hope that you enjoy this time together during one of the holiest times of the year!

Christmas Lessons and Carols for the Home 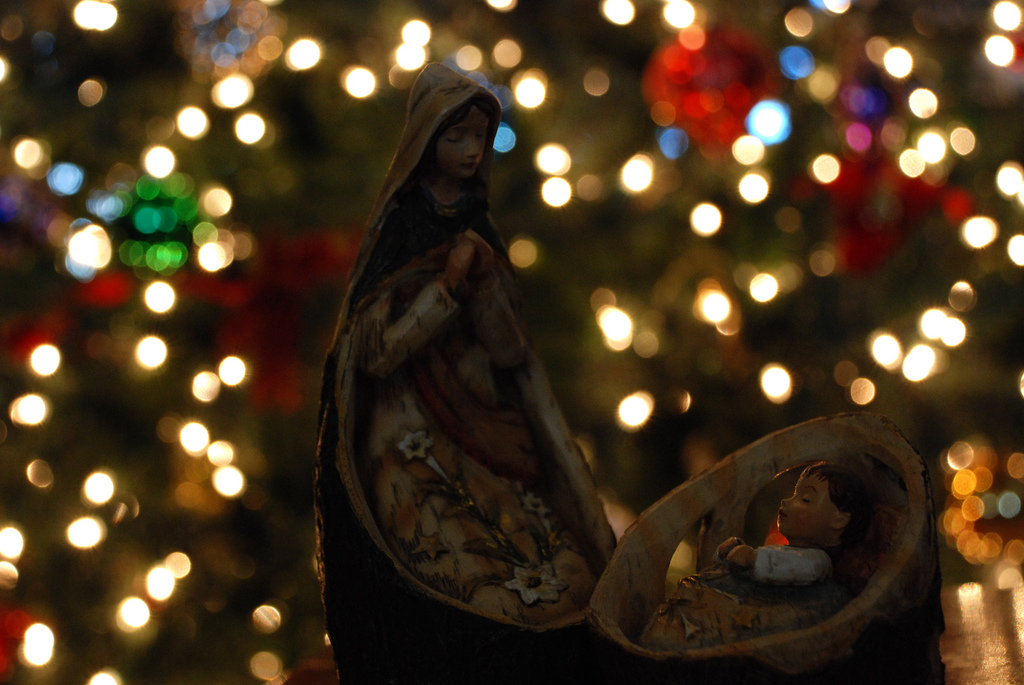 Gathering Prayer:
Dear God, we thank you for sending Jesus to us in human form on Christmas.  Be present in our time together, in our lives, on our lips, and in our hearts.  In Jesus’ name we pray, Amen.

The Birth of Jesus Foretold:  Luke 1:26-38 NRSV
26 In the sixth month the angel Gabriel was sent by God to a town in Galilee called Nazareth, 27 to a virgin engaged to a man whose name was Joseph, of the house of David. The virgin’s name was Mary. 28 And he came to her and said, “Greetings, favored one! The Lord is with you.” 29 But she was much perplexed by his words and pondered what sort of greeting this might be. 30 The angel said to her, “Do not be afraid, Mary, for you have found favor with God. 31 And now, you will conceive in your womb and bear a son, and you will name him Jesus. 32 He will be great, and will be called the Son of the Most High, and the Lord God will give to him the throne of his ancestor David. 33 He will reign over the house of Jacob forever, and of his kingdom there will be no end.” 34 Mary said to the angel, “How can this be, since I am a virgin?” 35 The angel said to her, “The Holy Spirit will come upon you, and the power of the Most High will overshadow you; therefore the child to be born will be holy; he will be called Son of God. 36 And now, your relative Elizabeth in her old age has also conceived a son; and this is the sixth month for her who was said to be barren. 37 For nothing will be impossible with God.” 38 Then Mary said, “Here am I, the servant of the Lord; let it be with me according to your word.” Then the angel departed from her.

Question:  Mary was surprised by the angel.  When was a time that you remember being surprised?

The Birth of Jesus the Messiah:  Matthew 1:18-25 NRSV
18 Now the birth of Jesus the Messiah took place in this way. When his mother Mary had been engaged to Joseph, but before they lived together, she was found to be with child from the Holy Spirit. 19 Her husband Joseph, being a righteous man and unwilling to expose her to public disgrace, planned to dismiss her quietly. 20 But just when he had resolved to do this, an angel of the Lord appeared to him in a dream and said, “Joseph, son of David, do not be afraid to take Mary as your wife, for the child conceived in her is from the Holy Spirit. 21 She will bear a son, and you are to name him Jesus, for he will save his people from their sins.” 22 All this took place to fulfill what had been spoken by the Lord through the prophet:

23 “Look, the virgin shall conceive and bear a son,
and they shall name him Emmanuel,”

which means, “God is with us.” 24 When Joseph awoke from sleep, he did as the angel of the Lord commanded him; he took her as his wife, 25 but had no marital relations with her until she had borne a son; and he named him Jesus.

Question:  We learn that Joseph is a righteous man.  When was a time that you tried to do the right thing, even if it wasn’t popular?

The Birth of Jesus:  Luke 2:1-7 NRSV
2 In those days a decree went out from Emperor Augustus that all the world should be registered. 2 This was the first registration and was taken while Quirinius was governor of Syria. 3 All went to their own towns to be registered. 4 Joseph also went from the town of Nazareth in Galilee to Judea, to the city of David called Bethlehem, because he was descended from the house and family of David. 5 He went to be registered with Mary, to whom he was engaged and who was expecting a child. 6 While they were there, the time came for her to deliver her child. 7 And she gave birth to her firstborn son and wrapped him in bands of cloth, and laid him in a manger, because there was no place for them in the inn.

Question: These are probably the most familiar few verses of the entire story.  What is the best Christmas memory that you have?

The Shepherds and the Angels:  Luke 2:8-20 NRSV
8 In that region there were shepherds living in the fields, keeping watch over their flock by night. 9 Then an angel of the Lord stood before them, and the glory of the Lord shone around them, and they were terrified. 10 But the angel said to them, “Do not be afraid; for see—I am bringing you good news of great joy for all the people: 11 to you is born this day in the city of David a Savior, who is the Messiah, the Lord. 12 This will be a sign for you: you will find a child wrapped in bands of cloth and lying in a manger.” 13 And suddenly there was with the angel a multitude of the heavenly host, praising God and saying,

14 “Glory to God in the highest heaven,
and on earth peace among those whom he favors!”

15 When the angels had left them and gone into heaven, the shepherds said to one another, “Let us go now to Bethlehem and see this thing that has taken place, which the Lord has made known to us.” 16 So they went with haste and found Mary and Joseph, and the child lying in the manger. 17 When they saw this, they made known what had been told them about this child; 18 and all who heard it were amazed at what the shepherds told them. 19 But Mary treasured all these words and pondered them in her heart. 20 The shepherds returned, glorifying and praising God for all they had heard and seen, as it had been told them.

Question:  The shepherds received the gift of being the first to be told of the birth of the Son of Man.  What was the most memorable gift that you ever received?

The Visit of the Wise Men:  Matthew 2:1-12 NRSV
2 In the time of King Herod, after Jesus was born in Bethlehem of Judea, wise men from the East came to Jerusalem, 2 asking, “Where is the child who has been born king of the Jews? For we observed his star at its rising, and have come to pay him homage.” 3 When King Herod heard this, he was frightened, and all Jerusalem with him; 4 and calling together all the chief priests and scribes of the people, he inquired of them where the Messiah was to be born. 5 They told him, “In Bethlehem of Judea; for so it has been written by the prophet:

6 ‘And you, Bethlehem, in the land of Judah,
are by no means least among the rulers of Judah;
for from you shall come a ruler
who is to shepherd my people Israel.’”

7 Then Herod secretly called for the wise men and learned from them the exact time when the star had appeared. 8 Then he sent them to Bethlehem, saying, “Go and search diligently for the child; and when you have found him, bring me word so that I may also go and pay him homage.” 9 When they had heard the king, they set out; and there, ahead of them, went the star that they had seen at its rising, until it stopped over the place where the child was. 10 When they saw that the star had stopped, they were overwhelmed with joy. 11 On entering the house, they saw the child with Mary his mother; and they knelt down and paid him homage. Then, opening their treasure chests, they offered him gifts of gold, frankincense, and myrrh. 12 And having been warned in a dream not to return to Herod, they left for their own country by another road.

Question:  The wise men came a long way to give gifts to Jesus.  What is the most memorable gift that you ever gave?

10 He was in the world, and the world came into being through him; yet the world did not know him. 11 He came to what was his own, and his own people did not accept him. 12 But to all who received him, who believed in his name, he gave power to become children of God, 13 who were born, not of blood or of the will of the flesh or of the will of man, but of God.

14 And the Word became flesh and lived among us, and we have seen his glory, the glory as of a father’s only son, full of grace and truth.

Question:  This reading from the beginning of the Gospel of John describes the coming of Jesus as the coming of light into a dark world.  Where have you seen the light of Jesus shining in this past year?  How have you been able to be a reflection of Jesus’ light?

Dismissal:  Go in peace.  Christ is coming.  Thanks be to God.

New Revised Standard Version Bible, copyright © 1989 the Division of Christian Education of the National Council of the Churches of Christ in the United States of America. Used by permission. All rights reserved.

Questions and order of service ©Pastor Breen Marie Sipes, Tri-Saints Lutheran Parish, ELCA 2017.  Please give credit where credit is due.